Louisville Trounces Marquette, and I Can't Keep Silent Any Longer

I don't know about you, but I find Louisville to be an intriguing team--no true "stars", but well rounded, deep, with a number of good shooters and an aggressive, Pitino-y defense.  Against Marquette tonight, Mike Marra stepped up to bury a number of shots and...uh..single-handedly really put the nail in the coffin...and um..hold on a second...Mike, what the fuck is that on your arm? 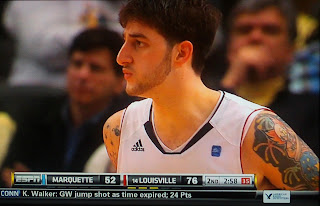 Mike Marra, is that a clown tattoo? 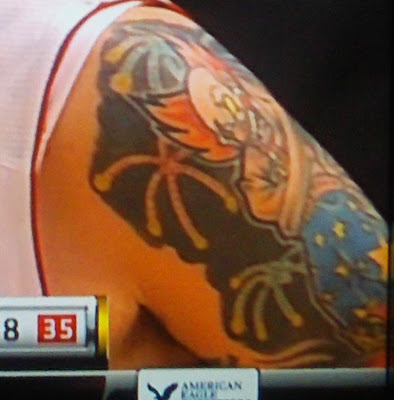 That's a clown tattoo in a straight-jacket? With star pants, and fireworks?  What is that shit?  I demand an explanation.  Is an homage to ICP or to Spawn?  At what age did Mike Marra think this was cool?  Did he draw this age 13, and look at it a few years later and say, "Fuck, this awesome clown sketch I made when I was bored in Mrs. Stevenson's Civics Class would be a fucking BOSS tattoo!"  Does he regret it yet?  Should we put an over/under at what age he will regret it?