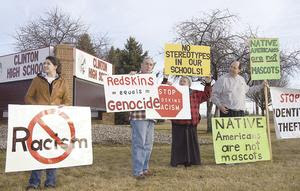 The reason? The name may be offensive to the most brutalized minority in American history.

No, just kidding. He just doesn't want them to use the name for their "Redskins Insider" blog. The blog itself, while often critical of Snyder's actions (because many times they were fucking stupid), has probably offered the most balanced coverage of the team during his tenure. It seems likely that the Post's coverage of his absurd defamation lawsuit versus the Washington City Paper stuck in his craw.

Around here, we've been actively searching for a term to replace "Redskins." I used DC Skins most of last year, but am always looking for something better. Now that Snyder is going scorched-earth on any media outlet which he doesn't own (and he owns plenty), perhaps we should change the name to the Washington Thinskins.
Posted by Andrew Wice at 1:52 AM

Email ThisBlogThis!Share to TwitterShare to FacebookShare to Pinterest
Labels: ownership tends to be dickish