Why I Hope/Think Liriano and Brewer Aren't Going Nowhere

The Star Tribune bloggers have been busy making news/rumors, and both Joe Christensen and Jerry Zgoda used similar logic in explaining why young potential stars are on maybe on the trading block.  Joe covers the Twins, and he wrote about how the Twins would be willing to trade Francisco Liriano if the price was right.  Which is always true, I think, for any player.  "the price is right" is a description and a caveat--what is the price? 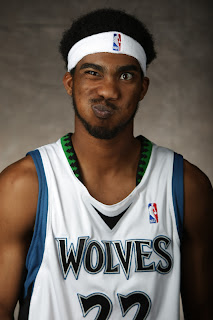 But other folks have done a very good job suggesting that Joe C. was getting ahead of himself and ahead of the Twins as well.  Twinkie Town did as good of a job as anyone could have breaking down the stats that Joe C cited, and included a great line about how if you have the best slider in the MLB, shouldn't you use it?  Good point, sirs.  Well presented.

A similar argument that Twinkie Town used when discussing Liriano could be applied to the "news" Jerry Zgoda broke/suggested/opined in covering the Wolves.  Now, no one but the most dedicated Wolves/Corey Brewer fans care about where he ends up outside of the context of the Carmelo Anthony trade.  As it has been noted before, I'm one of those fans.  So I was filled with anger when I read Zgoda's assertion that the Wolves would be looking to trade Brewer, regardless of whether it was part of the Knicks-Nuggets blockbuster or not.    Said Zgoda of the Wolves plans for Brewer: "They're looking to get something of value for a guy it sure seems like they've decided isn't part of their future, not after not talking contract extension with him last fall."

Christensen used very similar logic in discussing why Liriano might be trade bait--the lack of an interest in a long term deal.  But this overlooks something rather large and crucial--both players have a rather obvious injury history.  If a team has a chance to say, "Hey, before we sign you to a big deal, let's make sure you really are healthy", why wouldn't they do so?  The risk is higher with Liriano, because of the way those MLB contract extensions work and the danger of exposing a player to free agency.  But if the Twins know for sure they've got a stud, then they will re-sign Liriano.  For the Wolves, the risk of Brewer getting more money somewhere else is practically non-existent.  (And Brewer's agent is certainly overreaching when (if the reports are true) he's trying to make him a $13 million/year guy)

And that's important, when it comes to Brewer.  His second year was basically a waste--due to injuries, he played in all of 15 games.  He was healthy last year, but played on a totally craptacular team.  His agent is trying to get him paid based on that year, and the Wolves see him and use him (as he would be on any other legit team) as a high energy guy off the bench.  Not signing Brewer to an extension last year wasn't proof that the Wolves were ready to get rid of him, as Zgoda assumes.  It was a sign that the new management is engaging in something that former regimes of the Timberwolves never considered when they pursued Joe Smith, Ricky Davis, T-Hud, Marko Jaric, etc--it is a term known as "risk management".  At that point, Brewer had played exactly one year of healthy non-rookie basketball.  Why would you extend a role player's contract at point?  Play out the string--see what he does this year, and extend when it is appropriate. It is logical, but not a sign of dissatisfaction.

Now, Zgoda also quotes David Kahn as saying that they have too many wing players, and that's probably true.  But seeing as Beasley keeps aggravating his ankle, and Martell Webster has back spasms, it seems that all of a sudden, the Wolves have two reliable wingers--Brewer and Wes Johnson.  I don't see either of them going anywhere.

It is possible when dealing with injury-prone guys with high upside to take the lack of a long term contract offer to be a bigger deal than it is.  Here's hoping that's true.  Liriano and Brewer deserve to stay in the Twin Cities, and prove their worth.
Posted by Big Blue Monkey 2: The Quickening at 11:04 PM