Black Monday was more of a shotgun blast for NFL coaches this season. With more coaches fired during the season than ever before, the "hot seat" turned into an ejector seat for these franchises. The smoke has cleared and all HC positions in the league are filled. 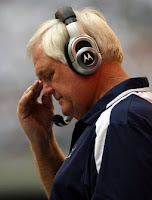 Dallas Cowboys fired Wade Phillips on 11/8, a great loss for Dallas-haters everywhere (and we are everywhere). Interim coach Jason Garrett, long-groomed for the HC post, went 5-3 and there is no question that he had the team playing better. He takes over a charhouse of overexposed pretty boys and bluster-buckets. Come August, they will once again be preseason favorites. But they will come up short, because they are assholes.

Minnesota Vikings fired Brad Childress on 11/22 and by all accounts it was necessary. Interim coach Leslie Frazier went 3-3, including a surprising win over the Eagles which drew the blueprint for how to stifle Vick. Frazier was rewarded with a contract and will build from a team similar to the pre-Favre explogasm: talented but mercurial and desperately lacking a QB. Far too early to tell if Frazier is up to the task, but guarded optimism is reasonable.

San Francisco 49ers fired Mike Singletary on 12/26 and people have been piling on Singletary since then. Absurdly high expectations in a weak division were shattered by week one (31-6 loss at Seattle) and the team nosedived. This is a team still without a QB and full-time RB. Former Stanford coach Jim Harbaugh has a strong pedigree and this team could be relatively good in a bad division. They are young and need true leadership.

Carolina Panthers did not renew the contract of John Fox after a miserable, withered 2-14 season. They are replacing him with top-flight Chargers D-Coordinator Ron Rivera. The success of this move depends on first-time O-Coordinator Chudzinski, former TE coach in San Diego. Rivera has no HC experience to fall back on and the team is in desperate need of guidance especially at QB. I don't expect a quick turnaround for this franchise. 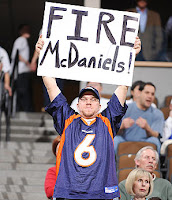 Denver Broncos fired Josh McDaniels on 12/6, a move welcomed by all. McDaniels tore apart a good team to build a monument of ego. But it was, in fact, a tomb. Denver wisely hired John Fox, a steady and experienced defense-first HC. This franchise was driven off the road: it might be a season or two before the Broncos are competitive. 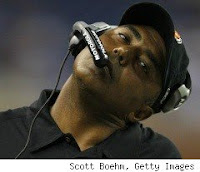 Cincinnati Bengals inexplicably re-signed Marvin Lewis. The "leader" of the most dysfunctional, poorly-behaved team in the league (that's right, Raiders and Cowboys) was retained, despite mountains of police and reality TV evidence. The Bengals clearly have no interest in being a good team.

Cleveland Browns fired Eric Mangini on 1/3. They hired Rams O-Coordinator Pat Shurmur. Although the Browns showed some signs of life during their 5-11 season, Cleveland chucked Mangini for an inexperienced HC who is brother to Fritz Shurmur, confidante of Holmgren. Bleh. Incompetence, or merely nepotism? Either way, the Browns won't field a winner any time soon.

Oakland Raiders fired Tom Cable on 1/4, despite signs that his team was finally improving. They swept the AFC West, but missed the playoffs. In a move which must be infuriating for Raiders fans, Al Davis cut Cable loose and replaced him with O-Coordinator Hue Jackson. Call me cynical, but I don't think this relationship will last very long. 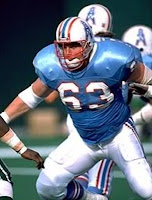 Tennessee Titans fired Jeff Fisher on 1/28. It was a surprise. Fisher had been forced to fire several of his coordinators, and his desire to hire his son may have played into the decision to fire the longest-tenured coach in the NFL. The team itself has been in a rut, much of which can be attributed to inconsistent QB play; a tremendous lack of discipline is impossible to ignore. Mike Munchak will rise from O-line coach to HC; he'll need quality coordinators and that might be a problem.
Posted by Andrew Wice at 7:41 PM