Sid Hartman is on Fire: Who Knows What This Japanese Guy Will Do?

Grandpa Simpson Sid Hartman is as insightful as ever.  First off, let us all enjoy the implied meaning behind the headline of "Childress Spotted Tomlin's Talent".  Sid was a big believer of Brad's, even as his team spiraled out of his control, on and off the field.  Me, I was against the man almost from the very beginning. 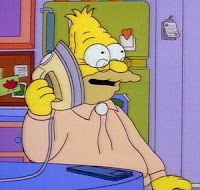 But you get what Sid is getting at here, right?  Brad Childress practically won those Super Bowls himself in Pittsburgh by plucking Mike Tomlin out of the obscurity of being the second most important defensive coach on a team with a great secondary head coached by a former defensive back (supercock Tony Dungy, and later John Gruden).  Why, if it weren't for Brad Childress, Mike Tomlin would still be telling Ronde Barber what to do!  Congratulations, Minnesota Vikings!  In Sid Hartman's spongy brain, you have won two Super Bowls.  Of course, Sid also thought there would be no way that Torii Hunter wouldn't be playing in Target Field, and that Kevin Garnett would never be traded.

Which means his crazy take on the Twins can only be good news.  He thinks they should have kept Nick Punto. NICK PUNTO!  Fun fact:  in three of the last four years, Nick Punto has hit under .240, slides head first into first base (leading to numerous injuries), and is in his early 30's.  Enjoy the great insight of Sid as he doesn't bother to try once to pronounce the name of new Twin infielder Nishioka (who is 26 years old and just won a batting title in Japan), pronounces Alexi Casillas' last name as "Cas-ill-ess.", and can't remember the name of 3rd baseman, rookie sensation Danny Valencia.  That's a sportswriter, ladies and gentlemen!

I actually tried to watch the video.

Andrew Wice said...
This comment has been removed by the author.
3:18 AM

Andrew Wice said...
This comment has been removed by the author.
3:18 AM