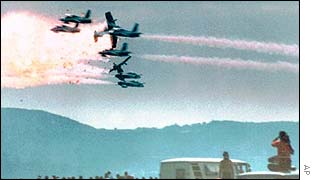 The Washington Redskins took a long time to bounce back from their ignoble pasting of a week ago, but came away with a win on the road against a bad team. Until then, they looked out-played and less disciplined than the one-win Jets with a first-time starter at QB.

In fact, the Redskins started the Fudgefest when their highly-ranked cover team was beaten for a TD on the opening kickoff by the NFL's top-ranked returner (Lil' Leon). The Redskins D was exploited by the inexperienced but promising Jets QB Clemens, who ran well and threw to wide-open receivers.

The Redskins established the ground game early, just as they established big hits on Jets WRs. By the 4th Quarter, in a pattern I've seen develop this year, the physical intimidation began to pay dividends. WRs began wilting over the middle, and showed little interest in catching passes. 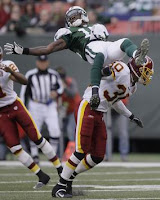 In the first three quarters of play, Clemens completed 65% of his passes. In the fourth quarter and overtime, Clemens only completed 42%. The game-changing play was the 4th quarter reception by a Jets WR who was hammered by CB Springs, forcing a fumble recovered by #30, rookie S Laron Landry (who is developing very well). That happens to be lil' Brian "Hall of Fame" Mitchell's number, so he has a lot to live up to. While still prone to undisciplined personal fouls and blown coverages, Landry crushed the Jets all over the field. With S Sean Taylor dinged up, this had to happen for the Skins to win.

I like this style of play. Against good teams, the offense must be able to pass the football while waiting to cash in on the ass-kicking. This was their first comeback victory of the year, largely because we weren't exhausted in the 4th quarter.

I loved the surprise onside kick. Perhaps inspired by the Virginia Tech onside kick, it fanned the Redskins flames and got them into halftime only down by a TD. It also allowed special teams to make up for its early gaff, and Suisham's perfect 5-5 day was the final difference in this one.

With the right side of our line on injured reserve, our offensive line's personnel is as good as it can be this year. I finally saw them begin to jell, albeit against a certifiably flawed Jets D-Line. The strength of their next opponent is, unfortunately, their D-Line. 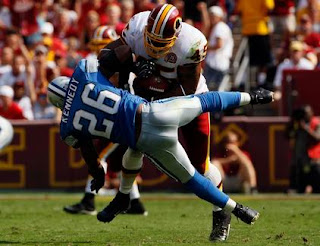 Next week the 5-3 Redskins host the broken-winged 3-5 Eagles. Despite ranking twelfth in points allowed per game and being tied for third in sacks, the Eagles are not healthy or growing up in a nurturing home environment. I expect a close game, but the Redskins will beat the pass-whacky Eagles by throwing body shots all night, getting the knockout in the 4th quarter.

On a quick tour through the rest of the IDYFT Cup, the Packers, Vikings and Lions had impressive wins over mediocre AFC teams. Perhaps the tide is turning, and middle-pack NFC teams are now better than middle-pack AFC teams. In a few years, the NFC may be able to challenge the elites in the Superbowl.

The Raiders should address the issue of a QB for the 2009 season.

Special thanks to rookie RB Adrian Peterson (296 yards vs. Chargers, leading the NFL in rushing yards and TDs and on pace for 2,000 yards). Nerf Turner was rubbing his face and pouting just like always, but he's not wearing the burgundy and gold anymore so I can finally laugh.

Don't look now, but if the playoffs were held today, the Lions & Giants & Browns would be going.

Next Week: the Packers host the Vikings in a game with strong bearing on the IDYFT Cup. 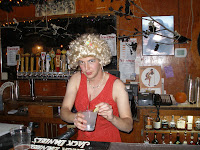 Whoops, how did this Halloween picture get in?

Email ThisBlogThis!Share to TwitterShare to FacebookShare to Pinterest
Labels: NFL

That is one handsome woman.

Don't any of you care about my football insights?

Or is it all about the junk in my trunk? All paid for, by the way.