On Thanksgiving, the Green Bay Packers committed ritual bestiality upon the Lions.

Somewhere I read a prediction that "the Pack has found a RB (Grant ran for 101 yards), expect Favre to still throw for 300 yards and 3 TDs (check) against a Lions defense that gives up yards in big chunks (9.3 yards per pass attempt, 6.7 yards per rush). The pass rush will break lil' Kitna (four sacks, all by D Linemen which is hot), and the INTs will follow (one, anyway). Expect a 2nd half blowout as the Lions quit at home (check) and the Pack squirts in their gravy (Checkmate)." 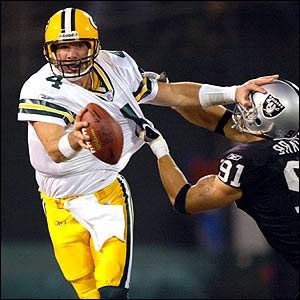 The Packers have a firm grip on the IDYFT Cup, but cannot truly claim it as their own. They face two more IDYFT opponents. A firm grasp, and they cannot do worse than tying for first place. Though they are still undefeated against IDYFT opponents, it is not yet appropriate to hand them the totem of victory.

However, facing the Oaktown Fudge-Raiders and the Lions, both in Green Bay ... perhaps Barnyard should make a little place on his mantel.

The second-place Washington Redskins are suffering the most injuries in the NFL second only to bitterly-disappointing Baltimore. The Redskins only have one more game with which to rise in the standings. Luckily it's against the fourth-place Minnesota Vikings. Will A. Peterson be running hard on December 23? I hope not. Without him, the Vikings have little chance of winning another game. 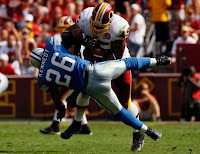 The third-place Detroit Lions (by virtue of getting blown the fuck up in the head-to-head matchup with the Redskins, losing 34-3) could still tie for first place, but must win on the road against Minnesota (next week) and Green Bay. It's more likely that they will continue their typical late-season swoon.

The last-place Oakland Raiders having nothing to play for and they're comfortable with that. Bet the farm that the Raiders quit before they get off the bus at Lambeau, and finish the year dead last as predicted. Because the Raiders suck.
Posted by Andrew Wice at 2:26 PM