Washington Gives It All Up for Griffin: UPDATE 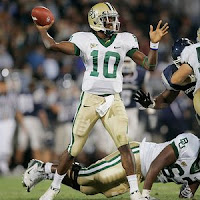 Although the deal isn't yet official, the Rams and Washington have agreed to trade draft picks. What did DC give up to jump four spots in this year's draft? A metric shit-ton.

Three first rounders and a second rounder is a helluva heaping bowl of oatmeal for one player. Thanks to clever structuring by the front office, DC is also many millions under the salary cap. I fully expect the dams to burst: they will overspend in the areas of WR, D-Back and interior O-line.

With QB decided upon, WR is the next position the team will target. Supposedly, free agents will be excited to play with RG3. But they will mostly be drawn to Snyder's spread-eagled wallet. Again, the front office deserves credit for inking smart deals the last couple years. We could easily be yet another shitty team which is inexplicably way over the cap (see: Raiders). 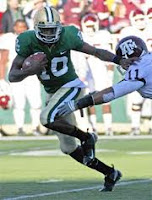 Those draft picks won't be missed if DC has truly found their franchise QB. Football experts have been wowed with his intelligence and leadership. That should help with the inevitable Vick comparisons. Physically, he might be the fastest QB to ever play in the pros. He has quick instincts and verifiable belly-fire. Overall, the Heisman Trophy Winner is acknowledged as the best player in college football.

But will he be a good QB in the NFL? Physically he is closer to Vick than Newton. He will need to pack on muscle if he has any hope to survive behind an O-line which gave up 41 sacks last year, tied for 8th worst.

According to scouts, RG3 hasn't yet shown a proficiency in looking off safeties, pocket comfort or making his progressions. By most accounts, he should be amenable to improving these areas.

I have watched a lot of highlights and I remain unconvinced that he can drop back and throw from the pocket. In the NFL he won't be able to run around and heave a long ball on a broken play, which seems to have been his forte.

Nobody will say it yet, but Shanahan's future in DC is now going to be determined by RG3's success or failure. As big-name free agents are added, the weight of expectations will grind on the young QB. I worry. I feel like I've seen this movie before.

But RG3 is our future, whatever that will mean. I am going to work hard to convince myself that we have made a good deal for an outstanding, long-term answer. A good place to start is with his defining game, an upset over Oklahoma. Griffin sparked a two-TD comeback and finished with over five hundred yards. The singular moment of the game, a strike in the end zone with 8 seconds left, begins at the 3:42 mark.

Last year, RG3 hit 72.4% of his passes at almost 11 yards per completion, and finished with a gaudy 37 TDs to 6 INTs. But start feeding that young man some oatmeal!

UPDATE: Roger Goodell just announced that Washington will be penalized for front-loading contracts during the cap-free 2010 season. This was the practice I was referring to when I said the front office wrote smart contracts. Ex post facto, DC is getting ripped for being clever, even though they did not violate any league rules and the contracts had already been approved by the NFL. Ripped for $36 million, which brings down our space under the cap to peanuts.

One of the most shocking aspects of the RGIII move is that the Savages say they haven't given up hope of signing Manning. Which by all accounts they really should give up all hope for.

I wasn't expecting it to cost the Drunken Savages quite so much wampum to get Griffin. But there are a bunch of franchises looking to get a QB (The Peyton Manning list is 12 deep, after all). So the Savages, do what they know to do--outspend everyone.

This time isn't wasn't just money, it was future options, and I'm with you--it is a little frightening. But if we are looking at a rookie who is somewhere between Cunningham and Newton in terms of physical ability, than I think we take it, and build around it. Quick hits; hitting running lanes, but knowing when to slide, etc.

I'm not worried about the sack numbers from last year. The O-line gave up a lot of sacks, to be sure. Rex Grossman also manufactured a lot of those sacks.

With Luck inked in as the #1 draft pick for two years, the Manning/RG3 hype definitely drove up their prices.

I can just imagine that the video is so cool because since I got this version of Google Chrome I have had problems with the flash plugin, it's a bummer, I think I will move back to FF