Little Caesar's Messes With My Mind 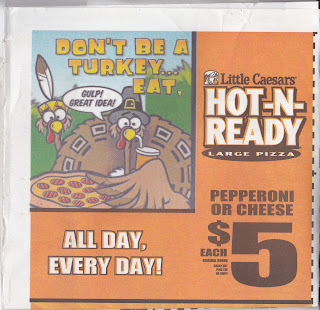 What is right--you are letting sad, lonely people who find themselves alone and sad on Thanksgiving that they do indeed have a way to be sadder and more lonely--they could go eat Little Caesar's pizza. Hey, sad and lonely people--you deserve to be sad and alone, and you don't deserve good pizza. You deserve this shit. Message delivered. That point is well delivered, Little Caesar's.

But all the same, it is delivered clumsily, yeah?

I mean--"Don't Be a Turkey--Eat."  Fuck that! Turkeys eat.They eat all the time. Everyone knows that. I know that, and I know I am not an expert in turkey dietary habits. It is confusing to suggest that being a turkey means that one doesn't eat. That makes no sense. But fine, I'll suspend my disbelief, and I'll give you the benefit of the doubt. Turkeys don't eat. Got it. I'm with you.

Or I would be, If you had not depicted turkeys eating in the very same ad in which you proclaim, "Don't be a Turkey..EAT!"

So, which is it, Little Caesar's? Am I a Turkey if I don't eat? Or am I a Turkey if I do eat? It certainly can't be both, unless we're dealing with some sort of Schroedinger's Box quantum theory bullshit. And whilst aiming a Thanksgiving pizza campaign at Quantum Physicists might make some sense, I don't believe that is what you were actually going for. I think your marketing is being run by the owner's son-in-law, who "just needs a chance to prove that he can market" or something like that.

I mean, c'mon. You can't depict a Turkey eating a terrible pizza whilst proclaiming that one should not act like a Turkey, and that the best way to do that is to eat a terrible pizza. It's fucking CONFUSING, Little Caesar's.