It has taken nearly 20 years of searching, but finally agents of The Federal Bureau of Investigation have stated in a press conference that they have found Bob. From FBI Regional Bureau Chief Gordon Cole:

-Gordon Cole: "WE LOST TRACK OF BOB NEARLY 20 YEARS AGO, BUT WE BELIEVE WE HAVE LOCATED BOB HIDING IN STATE COLLEGE, PENNSYLVANIA AS JERRY SANDUSKY!"

-Gordon Cole: "NO THANKS, I ALREADY ATE."

According to sources within the FBI, Bob was last seen in the woods of northern Washington. "Bob" is a demonic entity from a place agents referred to as "The Black Lodge." Bob spends his time possessing humans and causes them to commit horrible acts that elicit pain, suffering, and fear in those around him. This suffering, according to agents, is a kind of food to Bob. From the press conference:

Gordon Cole: "THE SIMILARITIES BETWEEN THE 1989 TO 1991 INVESTIGATION ARE TOO NUMEROUS TO IGNORE. FOR EXAMPLE, IN BOTH CASES, THE MAN WHO LEAD US TO BOB WAS NAMED MIKE."

Reporter: "You're speaking of Mike McQueary?"

As indicated by Bureau Chief Gordan Cole, there are other similarities. In both cases, Bob possessed a respected member of the community. Also, as revealed in the following pictures released by the FBI, the physical similarities between Sandusky and Bob are too much to ignore. 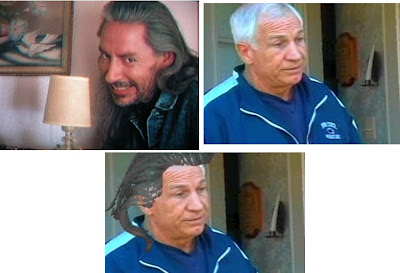 
Agent's believe that Bob escaped Washington and fled to Pennsylvania in the body of agent Dale Cooper. Since, Dale Cooper has left the FBI and pursued a career in dentistry. After he failed as a dentist, he has recently found success as the Major of Portland. From Dale Cooper:

-"After Bob left my body, I've gone through some hard times. I feel empty inside, like I don't have a soul anymore - so I moved to Portland."

Another FBI Agent involved in case, Albert Rosenfield, was last seen parading as an art instructor.

-Gordon Cole: "THE FBI WILL BE LAUNCHING A THOROUGH INVESTIGATION OF PENN STATE, THE SECOND MILE, AND OF LOCAL AUTHORITIES. WE'VE LOST TOO MANY GOOD AGENTS TO BOB. WE NEED TO CAPTURE HIM, AND WAIT 5 MORE YEARS FOR THE BLACK LODGE TO OPEN SO WE CAN LOCK HIM INSIDE."

After the press conference, the Penn State board of trusties released a statement demanding the FBI halt the investigation.

-"Since these FBI agents do not have financial ties and relationships to Penn State, the board of trusties, local authorities, or The Second Mile organization that they are not qualified to conduct an investigation. The agents can not be trusted to act in the best interests of Penn State." 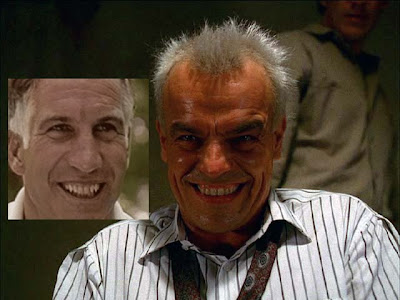 Posted by Muumuuman at 8:52 AM

When I saw this the first time, I somehow missed the Jerry/Leland picture at the bottom. As if Bob himself wasn't terrifying enough.

You're to blame for the nightmares I'll be having tonight.

I'm not sorry for sharing my unusual mind. My path is a strange and difficult one.

Muumuuman is either quoting a David Lynch character or Barbara Bush. Either way...terrifying.