Something To Build On

Whipping the loafing Bills in preseason shouldn't make Washington over-confident. They acknowledge that this is only the first step, but a convincing win is something to build on. I'm happier than after the 23-0 loss to the Ravens in the preseason opener last year. Washington takes on Baltimore at home on 8/21, a much stouter test of the team. 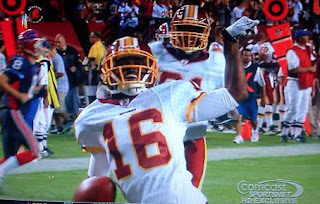 No one did more to help himself than lil' Brandon Banks, who scored on a 77-yard punt return. The diminutive speedster is a WR by trade but isn't getting any reps. Special teams is his only chance to make the roster.

How did those position battles shape up? At WR, Anthony Armstrong and Roydell Williams had good games. Devin Thomas made up for an early drop with a long TD and two blocks to set up PR Brandon Banks's TD punt return.

For backup RB, Ryan Torain and Keiland Williams (2 TDs) ran well. Larry Johnson and Willie Parker will play in the next game.

The starting defense came on slowly, and were aided by Buffalo's incompetence. They managed to get some pressure. The backup defense, particularly LB, had some startling lapses versus the run.

1st round pick OT Trent Williams played well by all accounts. He'll face a more serious test against the Ravens.

I'm interested to see just how slow Willie (nee Fast) Parker is these days. The reports have been so negative about his performance in camp that I'm almost rooting for the guy against my own will.

I always liked Wee Willie, but Washington needs a developmental project for its 3rd RB. Unless Parker outperforms Larry Johnson next Saturday, Parker is gone.

Torain and Williams showed promise, and the better of the two will become our RB of the future.