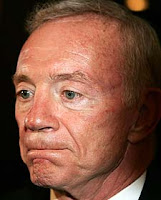 Welcome, dear friends, to the Playoff Pick'em.  Badcock Industries has pooled its vast resources, boiled them down to a paste, and then smeared that paste on Jerry Jones's limo.  Metaphorically.

This Pick'em is free to everyone.  Please list your picks in the comments.

These are the Wildcard games:
Bengals at Texans
Vikings at Packers
Colts at Ravens
Seahawks at Skins

How Do It Work?
It works thusly:  the first part of the Pick'em is a confidence pick.  Rank your picks in order according to which you think is most likely.

So if you know for sure that the Packers will win, put them at pick #1.  If you have to flip a coin on Colts/Ravens, put that pick at #4.

I won the regular season pick'em and, while I enjoy victory, I found that I preferred it when someone else won.  This could be you!
Posted by Andrew Wice at 1:32 PM