I'm a little gobsmacked by the reports that the coaches of the NBA, in their infinite wisdom of all things basketball, did not select Kevin Love for the All Star Game. 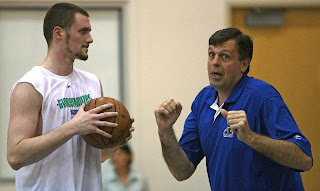 And the argument that is promulgated is simple:  the Timberwolves have won 11 games.  They've lost 37.  They were just blown out by the Memphis Grizzlies, and not for the first time.  This is the current formulation for explaining the snub.  Yahoo Sport's article on the All-Snubbed team said as much:  "The West coaches evidently didn’t put much stock in his accomplishments because Love’s Timberwolves have won just 11 games."

We don't know, of course, exactly how each coach decided to vote for who.  And they certainly did a better job than the fans, seeing as Yao Ming was voted a starter.  Damn you, Chinese fans!  But here's something I'm willing to wager--they aren't putting stock in KLOVE's accomplishments because they aren't really aware of them.  They haven't watched a bunch of Timberwolves game tape, and then looked at that horrible 11-37 record (hey, they only won 15 games all year last year!) and said, "Despite what I'm seeing in this video, I've decided I just can't vote for a guy who plays for a team that only has eleven wins."  They aren't watching.  Nor should they, necessarily.  They've got bigger fish to fry, like coaching their own team.  But they dropped the ball this time.

The argument of a good player on a bad team is as old as the All Star voting system.  And it is a reasonable argument.  Clearly, the coaches saw through the Clippers record, a solid ten games below .500, and made Blake Griffin an All-Star.  Sure, the Clippers play in the Pacific, which has one team over .500 (Lakers), and the Wolves play in the Northwest, where they are the only team below .500.  Sure, you might think that the Wolves routinely face tougher opponents than the Clippers do, and if their positions were swapped, it would be reasonable to think that the Wolves could match that 19-29 record the Clippers have.  But you would be wrong to think that, apparently.

Here's the thing--Kevin Love isn't just a good player on a bad team--he's putting together a season of the ages.  He isn't just leading the league in rebounding.  He's not just hitting well over 40% from 3-point land.  He isn't just leading the league in double-doubles.  Presumably, those are the kinds of things that make people and coaches shrug and say, "Yeah, but he's the best player on a bad team" and move on.  But there have always been lots and lots of good players on bad teams.  But in almost 30 years, none of those players who were snubbed ever had a 30 point, 30 rebound game.  No one has.  Not in 28 years.  You have to go back to Moses Malone, for fuck's sake. KLOVE has done that.  KLOVE is leading the league in Efficiency.  The four guys closest to him--LeBron, Howard, Griffin and Durant--are all going to the All-Star Game.  KLOVE is averaging over 20 points and 15 rebounds per game.  Yeah, sure--good guy on a bad team--except that hasn't happened since (again) Moses Malone, in 1982.  So this is something special, dammit.  This isn't Monta Ellis.  This is a potentially generational season, and the geniuses who coach the NBA have seen fit to ignore it.

For fuck's sake, NBA Coaches--even the New York Times has noticed!  (OK, sure...it is a NYT blog written by an NBA stats geek, but still!)
Posted by Big Blue Monkey 2: The Quickening at 10:25 PM

You make a compelling case, but you acknowledge the issue: nobody cares about the Timberwolves. Nobody.

I voted for Kodos.

I didn't write that nobody cares about the Timberwolves to offend their fans -- especially a 3-time World Champion of the IDYFT Pick'em (how about I send your prize after the Superbowl?)

But the NBA needs to contract. If you don't see that the KLove snub is an affirmation that Minnesota will lose its basketball team, you don't remember the North Stars.